Today’s post is an essay on a timely theme, with Clean Monday around the corner.  Guest writer, Michelle Rinehart, mother of four young children and a sister of ours in Christ from St. John the Baptist Orthodox Church in Warren, Ohio, considers the deeper spiritual implication in a well-meant but perhaps overused phrase. To visually illustrate the theme, we’ve chosen the icon of the Nativity of Christ, in which we see both the sober joy of childbirth and motherhood and the foreshadowing of death (the manger tomb). 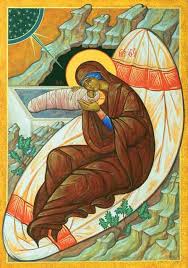 It is nearly impossible to be on the journey of motherhood and not be offered unsolicited advice, often in the form of platitudes. Every mom likely has her own “words of wisdom” that drive her particularly crazy, but for me, nothing elicits that nails-on-the-chalkboard sentiment more than:

“Enjoy every moment; it goes so fast.”

I worked part time as a receptionist in a mental health office when I was pregnant with my oldest two sons. During that time, one of the counselors gave me a book called The Language of Letting Go. For all of the advice contained in that book, the title has spoken to me more than anything over the years.

If true loss might be characterized by deep and profound pain, suffering and grief, I think of “letting go” as being more characteristic of accepting what I am leaving behind as life changes.

“Letting go” is not so much calling-hours worthy events as much as it is watching fall melt into winter or my oldest child waving to me from the window of a school bus for the first time.

As a mother, “letting go” means witnessing time and seasons passing in a form that is most concrete and intimate: through the lens of the precious flesh and blood of my children.

Somehow, at least for me, the wrinkles, grey hairs and other aches and pains that come with aging are not nearly as gripping as, say, hearing the “moo” of a cowbell in a grocery store dairy aisle and realizing that one of my children has just become too old to ring that now.

It is baby clothes that are now too small. It is a book that is now too short and simple to read before bed. It is a crib that someone doesn’t need anymore. It is my children’s lives going from lost teeth to lost innocence in what seems like the blink of an eye.

It is the mystery that in the victory of seeing a child grow up, there are more than 1000 moments of “letting go” that have gone along with it.

My husband recently told me about a practice in some monasteries where one of the monks is tasked with giving a daily reminder to the others: “Brother, we are going to die.”

The remembrance of death may seem morbid, but it has the paradoxical effect of inspiring living life fully and striving to do the things that matter. For the monastics (and really, not ONLY for them), this means a life of repentance and prayer.

I don’t live in a monastery. But, nevertheless, I have no shortage of women who pop into my life seemingly tasked with offering me a remembrance of death.

“Enjoy every moment; it goes so fast” often sounds to me like, “sister, we are going to die” as life races through its seasons toward its final destination.

“But at my back I always hear / Time’s wingèd chariot hurrying near; / And yonder all before us lie / Deserts of vast eternity…” wrote 17th century poet Andrew Marvell in his poem, “To His Coy Mistress.”

In my mind, Marvell’s winged chariot of time is often followed by a companion refrain from 19th century poet Emily Dickinson:

“Because I could not stop for Death – / He kindly stopped for me –  / The Carriage held but just Ourselves –  / And Immortality.”

The carriage of death will come to pick me up when time’s winged chariot brings me to its last stop.

But before I reach that last stop of letting go of this life, I am offered practice at letting go in a thousand little ways, especially as I raise my children. I am letting go of something at each mile marker as I strive to fulfill the task of teaching them how to be without me.

“It goes so fast” might be a trite platitude, but perhaps it is a palatable way of reflecting on the profound mystery of mortality and life’s transiency. When I remember that, I can let go of my frustration over hearing it so often.

Sister, we are going to die.

So don’t forget to say your prayers and hug your children.

Or, if that’s too much, maybe I will just say, “Enjoy every moment; it goes so fast.”

Orthodox in the Ozarks

Orthodox in the Ozarks